NonFiction Monday: A Place for Bats (by Melissa Stewart) 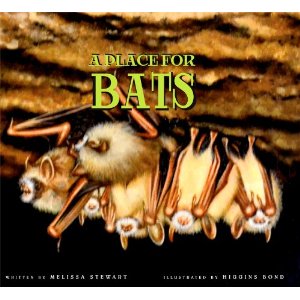 Non-Fiction Monday is here! It is my first time hosting, and I am thrilled!   Please join in using the self link-up below.

I have read several picture books about bats because they are such fascinating creatures.  My first encounter with one scared me to death!  I was 11 years old when one flew into my room late at night.  I had no idea what it was at first.  Eventually, it knocked itself out by running into the closet wall.  My dad picked it up and let it go out the window.  Even though they might startle you, I realized bats are harmless.  A few years ago we used to swim sometimes at night.  The bats would sweep down close to us to snatch the insects attracted to the light and water.  It was a wonderful site to see!  I had no fear at all.  Fortunately, my children did not either.  Bats play a vital role in our world.  We need to protect them.

A Place for Bats takes a different approach than most non-fiction picture books do on this topic. Author Melissa Stewart reveals interesting information about these flying mammals through her narrative, but the focus is on how humans can help make the world a safer place for them.

This book could actually be read a couple different ways, depending on the audience.  The top margin offers a straight-forward description while the semi-circle bubbles on the sides go into more detail about the topic on the page and relate it to a particular species of bats that has been impacted.  For younger audiences, teachers could read the top margin and, perhaps, summarize the more detailed information.  Older children will enjoy the well-written specific stories about the various types of bats and the environmental impacts.

Stewart offers many excellent and practical suggestions for how humans can live more harmoniously with the bats, such as turning off wind turbines on calm nights, not using harmful insecticides, putting up gates at the mouths of cave and mines, and protecting their natural habitats.  Many suggestions are simple things we can do in our backyards like building bat boxes, keeping cats indoors, leaving drooping fronds on trees, not removing dead trees, and planting flowers that attract the moths bats eat.

There are some fascinating facts about bats.  For instance, I did not realize they caught insects with their feet.  For some reason, I always thought they caught them with their mouths.  LOL  Also, plants need bats.  They play a vital role in pollination and the spreading of plant seeds.  One of the most important facts:  Despite commonly held myths, bats do not hurt people.  Instead, they are essential for keeping the insect population down.

Higgins Bond’s illustrations look like photograph snapshots with their vivid details and brilliant colors.  Bats are depicted in their caves and other natural habitats as well as in backyards and neighborhoods.  Each stunning picture encompasses a two-page spread.  I recommend A Place for Bat for ages 7 and up.   The book is an amazing combination of beautiful pictures and vital information.