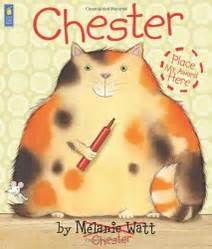 On one of my many excursions to the library, I saw a book called Chester

(ages 4-9) sitting out.  It had a large, plump cat with a mischievous smile on the cover.  I thought it looked cute, so I grabbed it.  Little did I know it would become a phenomenon in our household!

First, both my kids laughed hysterically as they read it (an 8 year old and a 12 year old).  Second, I enjoyed the two vivid personalities at war with each other for who is the author of the book.  Chester is a narcissistic but lovable cat.  He loves to interrupt the story with his own comments in red.  Melanie Watt, his rival, is forever trying to temper Chester’s ego and often bests him at his own game.  Third, the illustrations are fun.  They pull the reader into the conflict and the characters further. 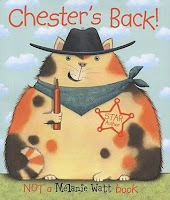 Whenever I really enjoy a book, I always check to see what else the author has published.  I found out that there is a follow-up called Chester’s Back

which we got our hands on right away.  My son was so taken with the books that I bought both of them for him.  When Chester’s Masterpiece

came out a couple months later, I reserved and purchased it right away too.  I enjoyed the first two best, but the third one is also charming.

the book showed up in our house, Chester the cat (and alter ego of my son) showed up.   My son has tried to use Chester to get out of his own mischievous ways (which did NOT work).  The part I enjoy most though is the imagination and creativity that Chester has brought out in my child.  My son has created a whole world based loosely on this fictional cat.  He has a distinguishable accent when Chester is manifesting.  He makes us laugh with his antics.  To me, part of the value of books is that they should feed our imaginations and help us express ourselves.   Melanie Watt’s Chester books have done that for us.  This series of books has permanently made an imprint on my family.

Teaching Ideas:  The Chester series is especially conducive to discussing point of view since there are two strong, defined characters that are the focus.  Discuss the differences in tone, mood, and content between them.  Use a Venn Diagram to outline the similarities/differences or make a chart together.  Also, connect that information to specific character qualities of each voice.  Help students to see the connection between voice, point of view, and character.
Next, play a game of “If I Were.”  Have 3-5 scenarios, such as playing a game, doing a project, or completing chores.  Ask the students to pick which character (Melanie or Chester) they would want to be with in that scenario and to explain why.  For example, If I Were to play a game of cards, I would want to play against ________________ because ___________________. OR If I Were doing chores, I would want _______________ to help me because _________________.   This game/activity is an excellent way to assess how well the students understand the characters. 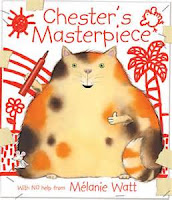 Finally, students can write their own version or the story.  For instance, in pairs or with a parent, students can create their own Chester vs. Melanie conflict.  One person begins to write a story (either made up or a familiar fairy tale/myth), while the other person jumps in periodically to give his/her point of view on how the story should go.  It should be done in a fun and humorous manner.   This activity could also be done in a classroom with the teacher telling the story while the students interrupt to give their 2 cents.