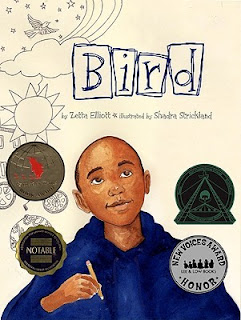 Publisher Summary:  Young Mehkai, better known as Bird, loves to draw.  With drawings, he can erase the things that don’t turn out right.  In real life, problems aren’t so easily fixed.  As Bird struggles to understand the death of his beloved grandfather and his older brother’s drug addiction, he escapes into his art.  Drawing is an outlet for Bird’s emotions and imagination, and provides a path to making sense of his world.  In time, with the help of his grandfather’s friend, Bird finds his own special somethin’ and wings to fly.

First Lines:
Today I saw a bird outside my window.
It was perched on the rusty rail of the fire escape
shivering in the window.
I wanted to open my window
and bring the bird inside
where it was warm,
but a sudden gust of wind
blew the bird away.

I drew a picture so I wouldn’t forget.

Bird is a picture book, so you may be wondering why I am posting it for Marvelous Middle Grade Monday.  To be fair, the book is shelved with the middle grade fiction in my library.  The target age, according to the publisher, is 8-13.  Also, the tone, content, and themes—addiction, loss, crime—are heavy.  Bird is not a book you would typically pull out for circle story time fun.  Despite the picture book format, it is definitely geared for middle grade readers.

The story is written in free verse.  The non-linear storyline works overall, but I did get a little confused at one point.  It begins with Bird spending time with his Uncle Son (a family friend), which is where the protagonist’s character begins to unfold.  Then, it switches to his relationship with his brother and to a lesser degree his grandfather.  The reader gets snapshots of their interactions; however, the exact time and space blends together like a mingling of memory and time.  The ending re-establishes the present—Bird learning from his mentor Uncle Son, who has taken on the role of grandfather, parent, and mentor.

Bird is the age of the target audience—about 10 or 11.  He is mature and reflective in many ways, but in others he is naïve and searching.   This story gives a voice to the many children who live in the urban setting and must face issues like dealing with drug addicted loved ones, having all their possesses stolen from their home, fending for themselves afterschool, and relying on community members for guidance.

The picture book format adds complexity and characterization. The illustrations reflect both Bird’s reality and his imagination.   Illustrator Shadra Strickland uses watercolors and gouache in blues, greys, and blacks to depict the text.  The muted colors add to the urban setting and protagonist’s internal conflict.  While he has an outlet in his drawing and the support of caring adults, he is dealing with some harsh realities.  The darker colors reflect that reality astutely.  In contrast, charcoal and pen sketches are intertwined to illustrate Bird’s drawings.  By studying them, the reader learns more about the protagonist’s inner thought-life.

Both his parents work long hours.  As a result, Bird often goes to Uncle Son’s apartment after school.  Other than the occasional interactions with his brother, he spends much of his time alone—drawing, reflecting, and dreaming. Those activities not only help him cope, but also give him a hope for the future.  Bird exhibits a strong sense of resilience in the midst of adversity.

The narrative and illustrations have a lot to unpack.  The theme and characterization build empathy.  As a result, I highly recommend Bird for middle grade readers.

Ideas for Extension Activities at Home or Lesson Plans for Teachers:
For other Marvelous Middle Grade Monday recommendations, check out Always in the Middle. 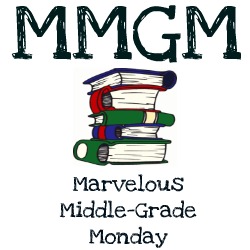