Today, kids are bombarded with television, video games, computers, and other technology.  In many ways, these things have deprived children of imaginative moments and exploration.  I notice a difference in my children (especially my son) when I “unplug” them, meaning no electronics.  He spends more time in his room playing with his toys (especially his stuffed animals that all have names and personalities) and exploring outside with his friends.  He also reads more.
If you don’t see that imaginative curiosity in your children or your students, unplug.  Spend an afternoon together playing with blocks, cars, and toy animals/dolls or just take some old boxes to create a clubhouse or a vehicle.  Older kids can put on dramas/skits or use art supplies to create something original.  Pull out some books and read some imaginative tales.  There are so many great picture books and novels that kids of all ages can enjoy.  They don’t have to be in preschool or even grade school to enjoy a good picture book!  I still read picture books to my 13 year old.
Here are a few of my favorite imaginative tales for boys.  Also, check out my favorites for girls. 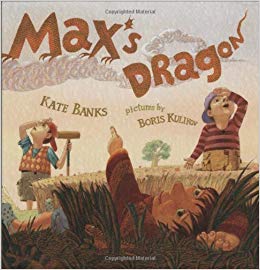 (ages 5-10) by Kate Banks
This book is a celebration of imagination!   As his brothers play croquet, Max begins his magical quest by sitting under an umbrella (though there is no rain) and brainstorming rhyming words.  His words conjure up and manipulate his imaginary dragon’s activities.  For instance, when he sees a giant dinosaur in the clouds over taking his dragon, he says, “If my dragon isn’t faster, there’ll be a disaster.”  Later, Max states “My dragon’s sneeze makes quite a breeze” when he feels the rough winds of on oncoming storm.  The boys experience how their imaginations and their words bring adventure, amusement, and accord between them.

Because this book also uses rhyming words as a major component of the story, it is a good opportunity to teach and/or practice this early reading skill.   It would be fun to practice a rhyming game or activities.  Here are a few ideas: 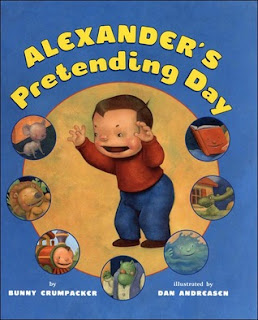 (ages 4-8) by Bunny Crumpacker
Alexander draws pictures at the table as his mother reads the newspaper.  He asks his mom to pretend he is a mouse.  She plays a long and gives him a snack (cheese).  Enjoying his mom’s attention and his imaginative world, Alexander pretends he is an angry lion, a fast train, a mean monster, and a large dinosaur.  Each time he looks to his mother for affirmation and attention.  She lovingly and wisely responds to each one of his imaginative rides.  I love the last page when he asks her what she would do if she did not have a boy like him.  It is a tender mommy moment meant to be experienced! 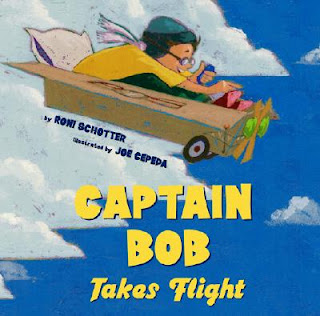 (ages 3-7) by Roni Schotter
Using a big box and lots of household items, Captain Bob becomes the fiercest flyer that ever flew in the cloud covered skies!  As he zooms off the cluttered bedroom runway, he scoops up unidentified low lying objects (such as socks) and spots the man on the moon (his lamp with an astronaut figure next to it).  He takes time to relax and write out a sky message that follows his plane through the clouds.  It is only a southerly wind (his mother’s voice) that brings him back to a hungry reality---for lunch.  Also, this imaginative selection uses many alliterative phrases and vivid pictures. 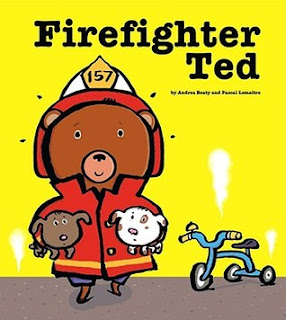 (ages 3-8) by Andrea Beaty
Ted wakes up to the smell of smoke which begins his day of imagination as a firefighter.  He does his best to put out “fires” throughout the day and to rescue those in need, but unfortunately, his good intentions are not always wanted or needed.  Ted usually leaves people speechless.  For instance, he rescues 1 cat, 2 dogs, and 3 tricycles, but he does so by putting them in the tree.  Later, he attempts to “help” the school principal and the class during the science fair.  Each endeavor ends in disaster which Ted appears oblivious to.  When there is a real fire though, Ted springs into action to help save the day.  The story closes with him beginning to imagine what it would be like as an artist.

Other Good Books in this Category:
The Puddle

(ages 3-7) by David McPhail
Using a boat and a rain puddle, a little boy has an imaginative experience with a turtle, an alligator, a frog, a pig, and an elephant on a rainy day.

A Box Can be Many Things

Two siblings use a box to create a cave for a bear,  a car for a race, a house for a visit, and a cage for a bird.  Even when the box is in pieces after all their imaginative play, they find it has one more use.
at November 07, 2010